When I was introduced to agile practices, paired programming made immediate sense to me. In contrast, there was a lot of resistance from the developers on our newly formed team. I tried to persuade them of the value, but sounded like a hypocrite since, as a BA, I was not pairing myself. Then our management decided that if it was a best practice for the developers, then everyone should do it. 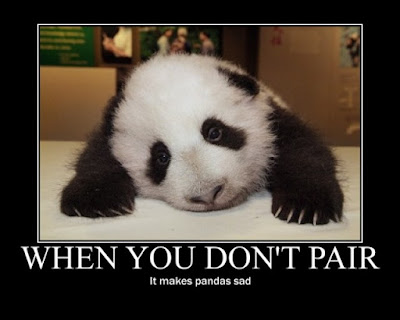 Groan! Suddenly I felt pressure to talk over every thought and idea with my own pair who was either a tester or another BA-like support person. (Side note: they were both skeptical introverts.) We spent hours together every day, creating wikis and automated Fitnesse tests, meeting with sme’s and writing emails. It seemed nothing was off-limits. During breaks we would even be in the bathroom at the same time!
Over a few weeks, we began making excuses to escape pairing. We avoided working in the bullpen, found meetings that only one of us had to go to, and exaggerated other non-project tasks. The pairing disappeared and so did the collaboration.
I learned many lessons from that experience.  Here’s just a few of them:
·     The most important aspect of an agile team: the people, the people, the people. Obvious, but missed by so many managers.
·      You cannot make someone share their thoughts and ideas against their will. As long as you are creating an environment that is open, then don’t take this personally. Tough lesson for me.
·      You also can’t make people listen to your ideas. That is another un-enforceable.
·      You can’t take a sound principle or method and just enlarge its scope. It will organically grow and expand if it should and if our focus is on continual improvement.
·      The 'work' of requirements gathering is very different than the 'work' of programming. Pairing may not be for all roles, but collaboration is for everyone.
On my new team there is no required pairing for the BAQA’s. But we do collaborate on anything and everything. We self-organize and decide what makes sense for the needs of each situation. This gives us some autonomy and prevents us from suffocating each other. And best of all, since the other BAQA’s are guys, I never have to worry about bumping into them in the bathroom.